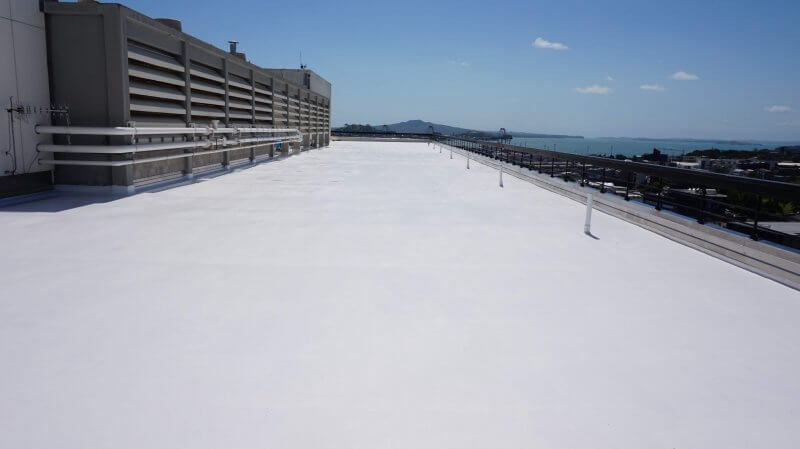 Posted at 09:55h in Membrane Roofing, Prevent by pchadminneu

This roof refurbishment breathes new life into an aging building by eliminating dampness as well as heat loss and gains.

Born out of the economic boom of the 60’s “Building 201” was the flagship of the University of Auckland campus in the late 1970s. Almost 50 years later it’s still one of the core buildings on campus, and is the home of the Human Sciences faculty.

As part of the University’s massive expansion and refurbishment initiative Building 201 has been given a facelift to last it another 50 years, starting with a refreshed envelope. The large flat roof area was a magnet for heat in summer and the underside was quite cold and damp in winter. So Neuchatel were contracted to provide a solution which not only weatherproofed the building, but minimized heat gains and losses.

There are many situations in NZ where technology advances render torch-on membranes simply an unnecessary fire risk. And Neuchatel supply one of the safest membranes on the market to combat this. But given the sturdy concrete and steel structure, and the significant ‘real-estate’ to be covered, Neuchatel were confident that the potential risks of installing torch-on membranes were minimal and so the cost savings justified using a traditional membrane.

The Neuchatel crew were tasked with removing the old membrane, and preparing the surface before installing the new membrane. Given such a large flat area, particular attention was paid to ensuring the roof was free of any peaks and troughs, so water could run off freely.

Because if water could pool on the roof it could lead to damp spots underneath (through thermal transfer), which ultimately would lead to weakening of the membrane itself.

Having applied the membrane, Neuchatel coated the entire surface with a high efficiency thermal reflector paint. Where the structure had wooden components University of Auckland chose to use our revolutionary fire-retardant double layer self adhesive “Safestick Prevent” instead of torch-on membranes (see image above).

And to be sure that the integrity of the job was maintained Neuchatel used FLIR thermal imaging cameras to measure the temperature build-up on the roof, and concluded that even on a hot summers day the temperature on the roof was barely a degree or two above the ambient temperature.

This simple refurbishment breathed new life and value into an aging building, ensuring many more years of faithful service . But more important, there were minimal disruptions to the university calendar, as the building was fully occupied throughoutot a single day of study needed to be cancelled or relocated for this work to be effected.

For the last 100+ years Neuchatel has been protecting tens of thousands of surfaces from deterioration caused by heavy machinery and the elements. In this time they’ve refined their products and services to be more durable, environmentally friendly and affordable – especially for large scale projects. For more information, click the links, or call us on 09 441 4595